MARTIAL ARTS FOR THE WHOLE FAMILY 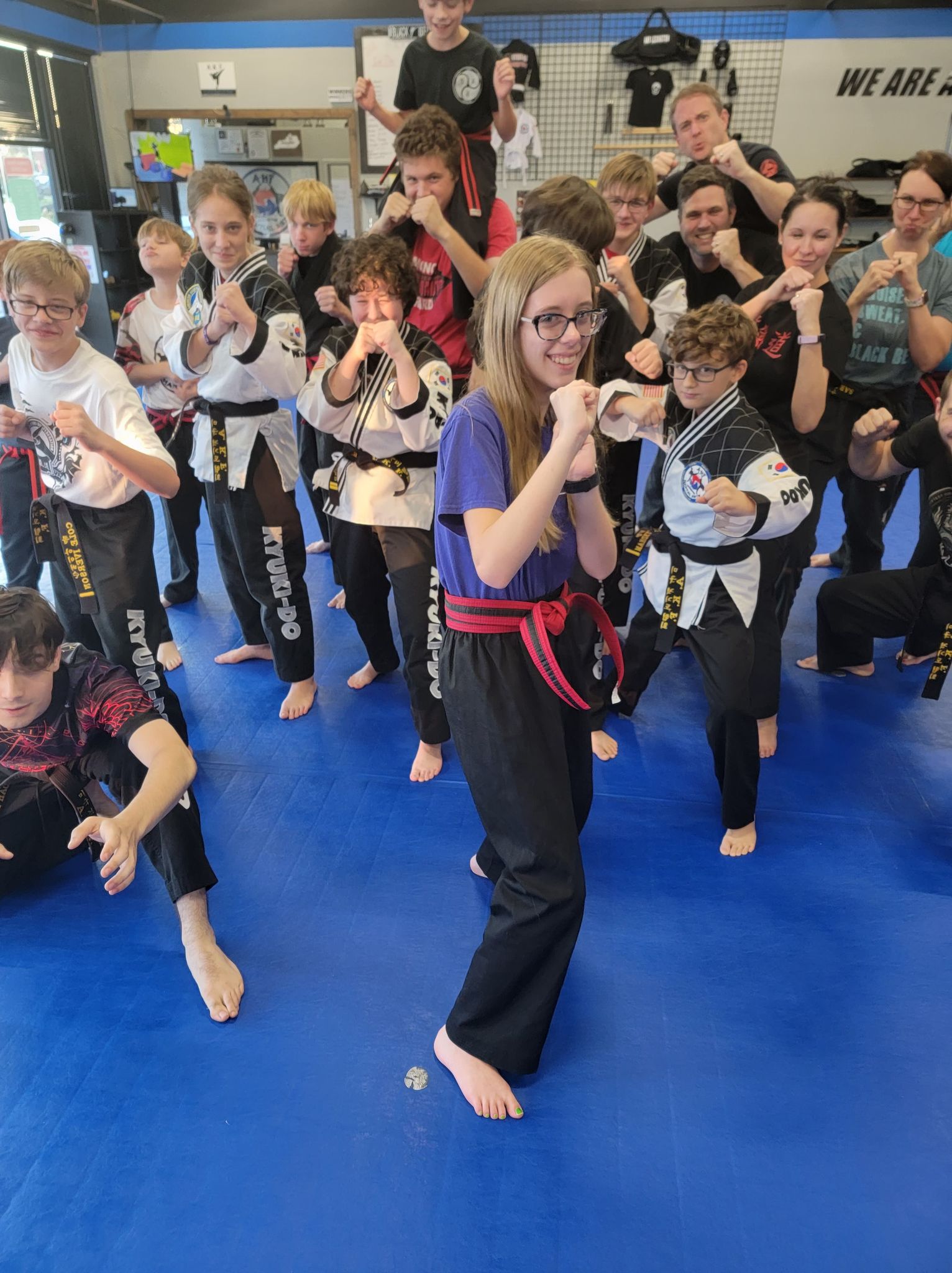 Empowerment – authority or power given to someone to do something.

I have been told that I am a robot.
In everything I do, I strive for perfection, seamless repetition, effortless efficiency. This is part of what makes trying new things difficult for me. If I find that I am bad at something, my first response is to promptly give up and never try it again. Of course, that is a terrible way to handle problems, but my perfectionist programming insists upon it.

Participating in AKF Lexington Martial Arts has taught me to override that programming. Kyuki-Do empowered me.

When I first started Kyuki-Do, my overall mindset could have been summed up in 3 words: this is stupid. I had absolutely no idea what I was doing. Seeing as how I naturally gravitate towards hobbies like reading, drawing, and writing, the art of physical activity was certainly not my forte. My balance was terrible, my aim was way off. My technique and execution were laughable while my confidence levels were so low they were probably listed in negative numbers. And, let’s just admit it, the fact that I had to wear the pajama equivalent of a white potato sack did not give me any sort of motivational boost.

To Old to start the journey to being Empowered?

Part of me believed that I was too old to be starting Kyuki-Do. This was flawed reasoning, seeing as how there were multiple adults who were low ranks, but I felt seriously out of place around so many of those short younger kids. It felt almost like being that one stupid kid who’s been held back so many times they’re a 15 year old 2nd grader.

Despite all that I previously admitted, earning my first four belts was a breeze. It was around my fifth belt that I began to realize that maybe, just maybe, I could actually get my black belt. But of course, that was like a toddler saying, “Maybe, just maybe, one day I’ll be a grandpa.” It was certainly a possibility, but it was so far in my future that it might as well have been a fantasy.

Empowerment …and so it began!

So I continued learning, improving, adjusting, climbing my way up the rank ladder. Martial Arts began to work wonders on me. I’ll never consider myself to be super strong, but I was no longer paper-putty-puny. My focus and attention span lengthened. I began to challenge myself, both in and out of the dojo. Joining the school’s Beauty and the Beast Musical never would have crossed my mind before doing Martial Arts, but I tried out and scored a part. (I have been told I made a really graceful enchantress, so yay, balance improvement!)

No longer the antisocial wallflower!

Kyuki-Do empowered me, giving me the confidence that I never seemed to have before. Talking to unfamiliar people still makes me a bit nervous, but I’m certainly not an antisocial wallflower anymore. I’ve found that I’m more likely to take charge of group projects, or propose something at Student Council meetings, or even to introduce myself to a new kid at school.

Empowerment – “I’ve become someone that I’m proud of”

Learning self defense certainly has its real life applications. As Ernest P. Worrel once said: “If I put these hands in my pockets, I will be arrested for carrying concealed deadly weapons. Knowhutimean?” But I’ve gained so much more than just an arsenal of kicks and punches. I’ve become someone that I’m proud of, someone who speaks her mind and can rely on her own abilities.

I’m a secret weapon in more ways than one!

Yes you are – EMPOWERED!

This is a Mommy & Me class where Mom, Dad or a helper get on the mat and help the student stay on task.

This is the only pre-main stream yet independent way young students can get in, have fun, burn energy and even earn their way into the main stream classes.

This is an alternative to traditional martial arts training. Perfect for the extremely shy, cautious, unsure or even the ADHD kid we love to help so much. Get moving, get training and earn their way into the main stream classes when they are ready.


This is our only main stream martial arts training program. Everyone who wishes to advance in rank, train at least two days a week, be held accountable, get engaged in a brighter future and/or has their eye on that future black belt, must be enrolled in this program!

Fill out the form below to

Get Your Spot Now!